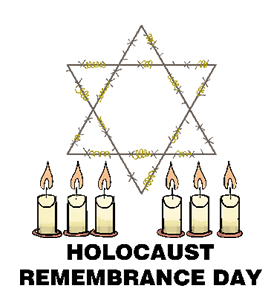 Yom HaShoah, also known as Holocaust Remembrance Day, occurs on the 27th of Nisan. Shoah, which means catastrophe or utter destruction in Hebrew, refers to the atrocities that were committed against the Jewish people during World War II. This is a memorial day for those who died in the Shoah. The Shoah is also known as the Holocaust, from a Greek word meaning "sacrifice by fire."